Go to the “Sketch Quest” page to see more on the game. 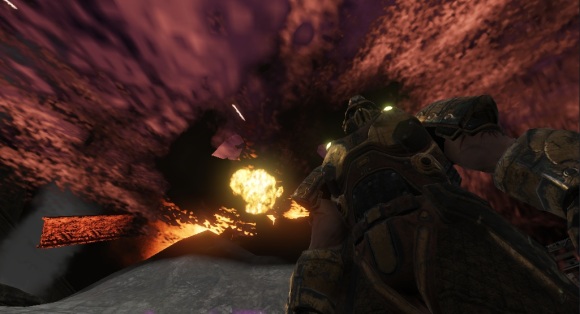 The final level design project at our school (at the time) was to create anything of your choice (seriously, anything) in the Unreal Editor, whether it’s a deathmatch or a single-player level, or tetris. No, I didn’t make tetris. I made a single-player level that put the player in the shoes of a clone waking up in a cell, and having to break out and take revenge on his creator.

The clone finds multiple clone tanks after escaping the cell and destroys a few, finally escaping the facility. Finally, after escaping the building, the player is opened up to an exterior environment and continues on a path ahead of him to get revenge, destroying quite a few things on the way.

After finding the last factory, the player enters to find the person running the factories and destroys him in a final quicktime event.

Buck, an ex-action movie hero, has been traveling the galaxy attempting to relive his movie characters (who are actually alter-egos) and save the civilians of the galaxy. However, Snuggles is a villainous feline with a galactic corporation who spends his time constantly acquiring new assets for his vast collection, by spraying them with his own urine.

Unfortunately for Buck, he crash lands on a newly Snuggles-owned planet and must fight to save the planet from Mr. Snuggles and his infamous spray bottle. Journey with Buck and his alter-egos to stop Snuggles from taking control of the galaxy with a variety of strange weapons and vehicles and destroy his metallic cat-army.

Peak was made to bring back the 90’s action hero mentality and hand it to the player. It is a new twist on the capture-the-flag gameplay.

The main character wakes up on the ground in some ruins, after an avalanche. His goal is to acquire the enemy flag from their mountain-top base and return it to his team’s ship at the bottom of the mountain. Players must sneak through the first sections of the level and use the environments to kill their enemies to take the enemy flag, and then blast their way out of the base.

Following the exit from the base, player’s snowboard (hoverboard in this version’s case) down the mountain and avoid avalanches, and incoming enemy ships, to complete the mission.

EXO-Mio is an action-platformer made in the Flash IDE that follows an exo-skeletal hero in a gruesome galactic tournament. Players must win arena battles on each planet to complete the tournament and win their prize.

Note: the actual game does not follow-up on the entire premise of the game. Production lasted until presentations, with only two levels completed.