Disclaimer: This was an article I wrote a few months ago as a piece of game journalism.

Oblivion is widely popular among role-playing game fans for both consoles (Xbox and PS3) and PC’s alike. This article isn’t to knock the game down a peg over its mechanics or its storytelling because I seriously didn’t get far enough to get into the game to know much about either.

The point of this article is to knock the game down a peg for how easily it brings out the lazy nature in me and reminds me of how easy it is to waste time over nothing. It made it very clear to me early on how much work it would take to really get to the meat of the game.

The game itself has strong gameplay and graphics, especially for the time it came out (2005.) However, while I played it I couldn’t help but realize how much it gates the player with its insane amount of content and story arcs. It has so many choices to make that it makes the player (unless they’ve played it before) get lost in how much they can do an actually make no progress whatsoever. After my first hour of playing the game I found myself becoming part of the Thieves’ Guild in the game and becoming quite stealthy. However, without the help of a friend who’s played as a thief before I was without direction or purpose.

Immediately, I reverted back to the person I was when university came along, and choices had to be made. The game took such an emotionally realistic turn for me that I became disappointed and quit playing for some time. It wasn’t like the game was hard, or challenging, it was that it didn’t give me a challenge. I could run around for hours and get absolutely nowhere because it doesn’t say I should “go north to the shimmering pool and obtain a legendary sword,” it simply says “you’re a Nightblade who can go invisible.”

Games these days are trying to find the middle ground where players are given a path but can choose the method they go about it. In Oblivion the player is given no clear path besides locating characters to deliver objects and receive new quests. The core of the game’s fun is choosing your path, though if you’re unaware of how to do that then the game itself loses that power. Suddenly players will be stuck in the beginning of the game without purpose and paths and be disgruntled with the game.

To its credit, this gives the game an unparalleled sense of reality in which we, as people of today’s society, often need reference or guidance to really discover what makes us happy and what will be the best path for us (which we often don’t get.) Unfortunately, while I enjoy a sense of reality in a video game I do not enjoy the disgruntling feeling of having to choose a path for my character from the bare ocean floor; there’s no tide to influence and guide me as a player.

As it is in reality, people will often need direction for themselves or they become lost and damaged. In my first hour of playing the game I was arrested twice and broke every single lock pick in my bag (25 of them) trying to break into one building. To be honest, I’m sure it takes some time in reality to learn how to pick a lock properly as well as get away with midnight theft. However, in a video game with such a brief and inconsequential tutorial for lock picking in the intro dungeon I could not help but feel that I had been punished for purchasing and attempting to play the game as a thief. The first attempt I had at lock picking was for a simple lock with only one successful pick necessary to open the chest, and it only took me three tries. I thought it was a little much at first as it also didn’t give and guidelines on how to actually do this properly, or give the player a test round without consequences, but once I unlocked the chest it opened and I obtained so many pretty objects! The game punished me for enjoying this by giving me a new challenge that required three successful picks in a row, of which I couldn’t complete and broke an unparalleled number of picks in the process. 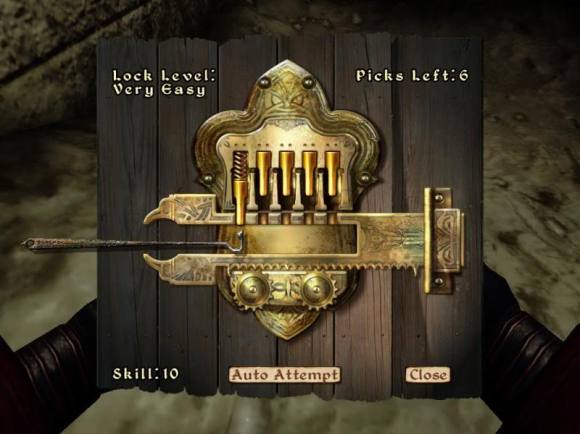 The bane of my existence in Oblivion. Also, this is not my own screenshot, I definitely did not make it to Skill Level 10.

The fact remains that the mechanic is rewarding, but unless the player is willing to tough it out and go around the world looking for more lock picks (which are extremely hard to obtain) they become instantly disgruntled and give up on the life of a thief all together. I guess this is okay while comparing the game to reality, but for someone who wants to play as a thief it’s awfully punishing for a game that should let you be whoever you want to be and at least make the endeavor enjoyable. The point of the game is to let the player escape into a new, vast world, not remind them of how limiting their own world can be. It disappointed me even to the point where I lent over, put down the controller, and turned off the console. That is a failure for both me and the game, because a game should never make me want to put down the controller, and I hate surrendering to a game.

The last time I honestly remember putting down a controller over a game was Bayonetta, and that was just a bad idea from the start when I began playing the game on the hardest difficulty. I thought I’d get a bit of a challenge and I ended up wasting a whole night on the first two bosses of the game, and still got a good experience out of it. That disappointment is different from Oblivion however, as I often like to tout that I even beat two bosses on Bayonetta’s hardest difficulty. With Oblivion however, I find it embarrassing to go up to a friend and say “I made it an hour in and got arrested twice; i also broke 25 lock picks.”

It’s embarrassing on the same level as telling someone a failure I had in my own life. You don’t go and tell someone that your girlfriend broke up with you because you weren’t a good boyfriend and because you treated her like shit, you tell them that you tried living your life and she broke up with you because she couldn’t keep up with you. Similarly I will tell someone about my failure with Bayonetta because I attempted the highest difficulty and I have a funny story to say about it, because at least it was a test of skill, not will. If I tell someone, however, that I gave up on Oblivion they think it’s because I didn’t have the nerves of steel to tough out a one hundred-hour game experience, and that reflects on me as a person in their eyes.

That is my problem with Oblivion, how well it can connect me to my own, upsetting reality.

We all have that problem with someone or something that reminds you of that one aspect of your life that can make it seem horrible. Mine: I’m too lazy get past the start of a book to get to the meat of the plot and enjoy it. Oblivion reminds me of this.

To view more of my opinions on player choice (about our own game Sketch Quest) you can read them here: Guided Player Choice, Skill vs. Choice, and How to Cater to Skill. 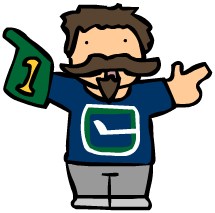